The Surgeon General and the US Environmental Protection Agency (EPA) recommend testing for radon gas along with mitigation when high levels are present.

According to EPA recommendations, radon levels exceeding 4 picocuries per liter (pCi/L) pose a health risk and should be mitigated. The presence of radon gas at 4 pCi/L or above is concentrated in your home at levels 10 times higher than outdoor air levels. The EPA also notes levels below this measure can still pose some risk as does the World Health Organization, which recommends mitigation if radon levels exceed 2.7 pCi/L.

Technically, no amount of radon gas levels are considered to be safe. Any presence of radon gas increases your risk of getting cancer. Even a reading of 1 piCi/L is equivalent to smoking 2.5 cigarettes daily. 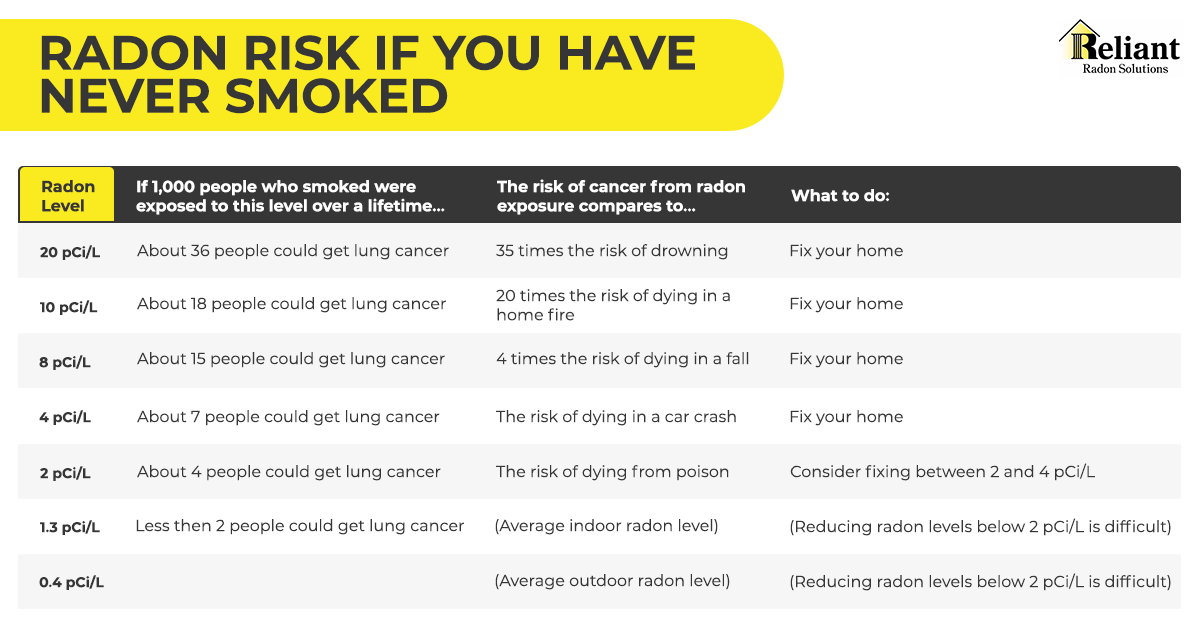 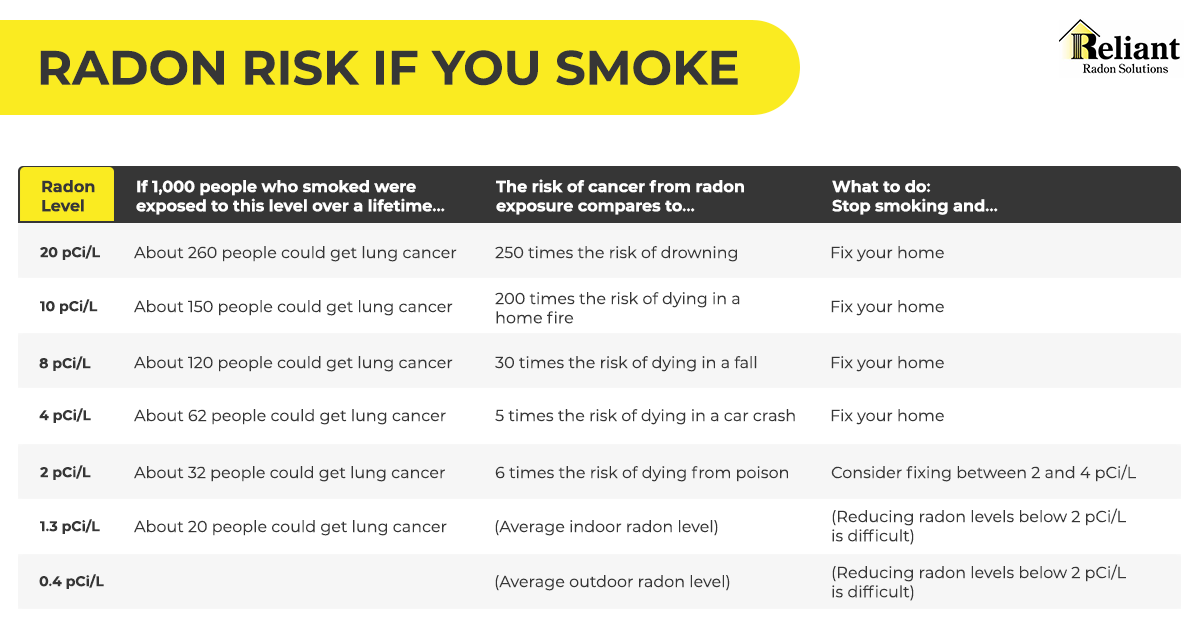 Similar to carbon monoxide, radon is colorless and odorless. Radon is a naturally occurring gas that results from the decay of uranium in rocks and soil. As it rises to the surface, it can be trapped inside structures such as a home or workplace. The amount of radon gas inside is then measured as a level in the United States as a Picocuries per liter of air, abbreviated as pCi/L.

Dangerous levels of radon gas are more common than you might think. The EPA estimates that one out of every 15 homes has elevated radon levels. The only way to detect its presence is through testing.

How Do You Test For Radon?

Does your home, school or business have dangerous levels of radon gas? The first step is testing.

Testing is a fairly straightforward process. You may choose to do it yourself or a radon professional to handle it for you.

How Often Do I Need To Test for Radon Gas Levels?

Many properties are required to test for a variety of applications including multi-unit buildings, home daycare centers, retirement homes and more.

For homeowners, radon testing should be part of home maintenance, similar to the way you clean your gutters to prevent leaks or check your foundation for cracks to avoid moisture from seeping in. Experts recommend testing at least once every 2-3 years to be safe. Additionally, the following should also qualify for a radon test:

Real Estate Transactions: Before buying a home, it should be standard practice to conduct a radon gas test. Many states require that homes be tested as part of a real estate transaction. This test typically occurs around the same time as the home inspection.

Post-Mitigation: The EPA recommends that homes be tested once every two years after a mitigation system has been installed. This ensures that your system is working properly.

After Remodels: If you have remodeled your home including changing the design of your HVAC in a room, it is recommended that you test for radon. Remodeling can cause your air flow to change throughout the house.

What Happens If My Radon Level Exceeds the EPA Limits?

Several variables will impact how radon mitigation is undertaken. Your home’s structure and foundation are two important considerations.

The Foundation Of Your Home Or Building

Hopefully, your foundation was constructed over gravel or another porous type of surface. This makes it much easier to pull the radon out of the ground.

Many older homes have been built over solid ground, wet earth, or rock. Because these surfaces are less porous, it requires a more sophisticated approach. You may need a larger fan or a more extensive radon mitigation system.

Also, if you don’t have a continuous slab under your entire home, it may require multiple systems to effectively reduce radon levels. This is most common in homes that have an addition built on the existing foundation.

The Structure Of Your Home Or Building

How your home was framed and built will also play a significant role in how your radon mitigation system needs to be designed. Most commonly, three to four-inch pipes are used to transport the radon gas to the roof. Holes must be drilled in the floor and ceiling at each level to create the pathway. If at all possible, you want these pipes inside your walls to make them invisible.

Depending on how your home is constructed, it may not be possible to create a straight line from the foundation to the roof. This means pipe bends and joints that also must be sealed properly to avoid leakage.

The air pressure in your home is lower than what’s found underneath your foundation. This creates a vacuum effect that can suck the radon gas through cracks or openings in your foundation.

Unfortunately, it’s not as simple as sealing and patching cracks or openings. While the EPA says that sealing cracks and openings is a basic part of radon mitigation, radon can still enter your home in other ways, such as through sump pumps. As your foundation ages, new cracks can occur. Caulking and other methods of sealing have a limited life span. Block wall foundations can be difficult to seal properly because of their construction. On top of all that, hairline cracks are easy to miss and turn into significant entry points that raise your radon levels.

These are just some of the reasons the EPA does not recommend sealing as a stand-alone solution. Tests show sealing alone does not significantly or consistently lower radon levels. Normal settling, the EPA says, can continuously open new routes or re-open old ones.

Sealing cracks and openings should be part of the process of reducing radon levels, it only works in conjunction with an effective radon mitigation system.

How Much Does It Cost To Lower Radon Levels?

The cost of radon mitigation will vary depending on all the factors we’ve already mentioned. The size of your home, the design, and the mitigation system that is required will also need to be factored in.

Radon mitigation will have a similar cost as other common repairs you might do around your home.

After installation, you should only see a slight increase in your utility bill for powering your fan. Most people don’t even notice a difference in their energy usage.

How to Find A Qualified Radon Contractor

Most states require radon professionals to be licensed, certified, or registered, so a good place to start is with the state agency that oversees air quality. You can find a list of state agencies on the EPA’s website.

The EPA also recommends using a professional radon contractor that meets these set of requirements:

Take the First Step To Address Your Radon Level

Radon exposure is cumulative. The longer you are exposed to radon gas, the more impact it can have on your health and the development of lung cancer. Symptoms can go undetected for a long time. If you aren’t conducting regular tests, you could be exposing yourself to danger before any symptoms show up.

The first step is to do a test for radon gas levels. Since you can’t see or smell this deadly gas, testing is the only way to detect radon gas levels. If tests show there’s a problem, mitigation can significantly reduce the danger.

At Reliant Radon Solutions, your safety is our number one concern. Radon is a colorless, odorless, and tasteless gas that is dangerous to your health. It can only be detected by testing. We are here to test, monitor, and mitigate the radon in your home or school as soon as possible!

The United States Environmental Protection Agency (EPA) has determined that if radon tests show an elevated level of the gas (4pCi/L or higher), then it's important to get your building mitigated (fixed) immediately. While radon testing kits are available for you to purchase, why not let certified professionals do that for you?

Reliant Radon Solutions' staff are trained professionals in radon testing, system inspections, replacements, and mitigation. We can design a system if your home is still being built, or if your building has been standing for dozens of years. Our expertise will give you the ability to breathe easier in your home.

Reliant Radon Solutions was founded in 2003 by Steve Shaw. As of January 2016, we are proud to say we are a woman-owned business! Our staff members are certified by the National Radon Proficiency Program (NRPP), with certifications in radon measurement, testing, and mitigation. As part of the founding members of Women Against Radon our staff invites you to become a part of this dynamic campaign. Our goal is to raise awareness about the dangers of radon & win the war against radon!